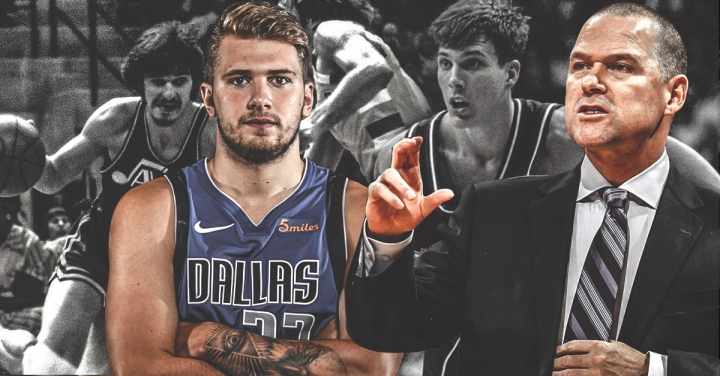 Friday evenings’ contest between the Denver Nuggets and Dallas Mavericks ended 114-110, in favor of the Nuggets. After the game, Nuggets head coach Michael Malone spoke of his impression of Mavs rookie Luka Doncic. He compared Doncic to other great Caucasian guards, such as Pistol Pete and Jason Williams.

“He has a flair about his game that reminds you of a Pistol Pete, Jason Williams. His passing ability is phenomenal. He’s a guy that you like watching and his ability to play pick-and-roll, find the open man, hit big shots, he plays like a guy that’s not an NBA rookie and I think that speaks to his ability to play at such a high level over in Europe and even leading his country to the European Championship a few years ago. Very, very bright future and Dallas has a great player on their hands.”

Doncic this season has proven himself to be an up and coming all-star. His talents at only 19-years of age are beyond impressive. He has the basketball IQ of a tenured veteran.

The 6-foot-7 positionless forward’s ability to run the pick and roll is unheralded. He has a lot of different moves in his arsenal. His stepback jumper is like that of James Harden. His vision is that of an elite point guard. His game is revolutionary.

Doncic so far has averaged 20.7 points, 7.2 rebounds, and 5.6 assists per game while shooting 43.0 percent from the field and 34.8 percent from beyond the arc. His percentages will only improve with experience, and so will the volume of assists and scoring